Well 2016 has rolled around, and while everyone around me is talking 'New Year, New them' bollocks, I'm standing here looking at an unending pile of little lead men. So I've decided to jump on the bandwagon and sort out some New Year resolutions, and figured a blog would help make this happen.


I have always been subject to the 'ooh shiny' gamer complex when it comes to projects, and this is something I'm going to work very hard to try and overcome in the coming year. In order to keep on track,  I have put together the following list to guide my planning, perusing, purchases, and painting.

I am hesitant to place unpainted lead on a table, which when coupled with my failure to stay on task and complete a project meant that I hadn't played a game of anything in nearly three years. In order to get back to the gaming table, I commissioned a small Morat Aggression Force army from Above the Tabletop here in Australia. I was extremely pleased with Matt's work, and he has since completed two further MAF lots for me.

Depending on the weapon load-outs, I have nearly 800pts available to place on the table. I now have more than enough violent space monkeys, and do not plan on purchasing anything further for the list in the immediate future. Once the Suryat box is released, I will grab the new drones, Rodok, and the rumoured new light infantry, and send it to Matt to paint up to match my existing collection.


I was introduced to this wonderful hobby of ours through my grade 5 teacher, and his gorgeous 2nd Edition Valhallans. As a result, I have always had a soft spot for the Games Workshop 'Grimdark' universe. What I'm not so keen on are their exorbitant prices here in Australia, and the trend of the game towards competitive play.

Ever since being introduced to Dirtside II at a local miniatures convention years ago, I've been attracted to the idea of being able to represent an entire company with support on the table in a standard game. I plan on recreating the Steel Legion army I always wanted, in Epic scale.

I was lucky enough to pick up the following gorgeous minis from a fellow Australian, and plan on building my army around them. I've got a couple of companies worth of Leman Russ on the way from Trolls Under the Bridge, and I've nabbed some awesome heavy armour in a forum lot on TacComms. I will primarily play using the Minervan Tank Legion, however I'm also keen to try a new Heavy Mechanised List currently in testing on TacComms.

The other thing I'd love to do with this project is build a modular city layout to give our games a sense of scale, rather than only playing with scale neutral terrain such as rivers and hills. I spent some time over the past week designing how this would work, and eventually settled on 150mm squares, with 45mm wide roads running down one side of the tile. 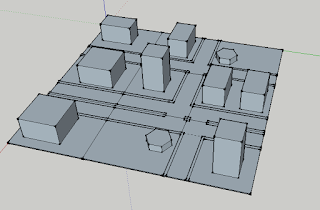 I've placed a small order with Wasteland Game Studio for some of their fortified and industrial buildings as a start.

I've got quite a collection of 28mm fantasy lying around from my attempts to make my RPGs more visual, with the new fantasy skirmish release Frostgrave from Osprey, I've got the opportunity to get some of these models on the table. I will keep an eye out for other suitable rulesets however, and am already waiting on a copy of Dragon Rampant.

In the meantime I'm going to start with some wandering monsters that have been sitting in my pile, and will use these as an attempt to improve my skills at painting 28mm miniatures. This will be my 'breather' project for the year, and will be unlikely to see a tabletop.

This is another project that has been on and off for easily my entire adult life. I've always been fascinated by the Australian Defence Force and their operations abroad, and would like to represent these on the tabletop. I have amassed all the (now OOP) Force on Force books, and a fair amount of suitable terrain to represent Urozgan Province. With a recent order of Elhiem Figures, I now have more than enough unpainted lead to represent the Australian forces deployed on Op: Slipper, and their insurgent opposition.

I used to be involved in a Pathfinder group that played twice a week, but sadly due to mounting work pressures and the desire to spend more time with my lady-love, the group fell by the wayside.

This year, I want to get back into roleplay. Most of my collection is Pathfinder, but I also have a selection of D20 modern, and some other niche products such as the Dresden Files RPG, and Hellboy RPG. If I can't find an existing group to join, I'll try and bully and harass some friends into something resembling a group and see what happens.